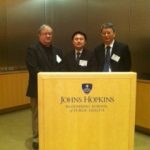 Dr. Layton was invited to present at the Autism Speaks international workshop on his, Dr. Hao, and Dr. Zou’s Chinese autism diagnostic test: Clinical Autism Diagnostic Scale. There were more than 50 international professionals invited to the workshop to address the challenges and opportunities to enhance autism research and services worldwide, particularly in low- and middle-income […]

Posted in Autism, In the News, Presentation, 中国 (China) | Leave a response

We are proud to announce one of Talk and Total’s own staff members, Dr. Grace Hao, has assisted in establishing a Memorandum of Understanding (MOU) between North Carolina Central University and China’s Beijing Language and Culture University. The MOU builds a partnership between the two universities, with the purpose of creating a Bilingual Speech–Language Pathologist training […]

Posted in In the News, 中国 (China) | Leave a response

Evaluating Autism in a Chinese Population

Dr. Layton and Dr. Hao have published a research study on a new diagnostic test for autism spectrum disorders called the Clinical Autism Diagnostic Scale (CADS). You can read the full abstract below the break:

What is the Triangle Down Syndrome Network?

Posted in Down Syndrome, Gatherings | 1 Response

We have big news for our community. Talk and Total Communication Services has partnered with Dawn Evans to offer individualized tutoring services and instruction for students with special needs, regular education, home schooling, or early education. Dawn Evans is an experienced elementary education teacher, special education teacher, and early childhood specialist who loves to work […]

Posted in In the News | Leave a response

Long-time Talk and Total parent, Jane Ball, was interviewed for Garner TV’s program, Around Town.  Produced monthly for the Town of Garner NC, the show airs on Garner’s Channel 11, on their website at GarnerNC.gov, and also from their YouTube channel. March’s edition featured the interview with Ball. The interview, conducted by Mayor Ronnie Williams, […]

Posted in Down Syndrome, In the News | Leave a response

Posted in Down Syndrome, Gatherings, In the News, 中国 (China) | Leave a response

Dr. Layton and his friends go to support the Fall 2010 Buddy Walk. The record-breaking 12th annual Buddy Walk at Briar Creek was great fun. The Buddy Walk is put on each year by the Triangle Down Syndrome Network.

Posted in Down Syndrome, Gatherings, In the News, Photos | Leave a response

The Fall Festival 2010 was a huge success! The children got to enjoy face painting, farm animals, hayrides, and even horseback riding.

Posted in Gatherings, In the News, Photos | Leave a response

Dr. Layton traveled to Guangzhou People’s Republic of China in August to train parents and professionals on “Communication Among Children with Down Syndrome.” The training lasted three days including Dr. Layton evaluating several young Chinese children with Down syndrome.

Posted in Down Syndrome, In the News, Photos, Workshop, 中国 (China) | 1 Response